Donatos CEO Tom Krouse is a strong adherent in the concept of “management by walking around” and now the brand itself is building a future by spreading itself around through its first foray into franchising and a unique co-brand partnership that will vastly expand its U.S. reach. 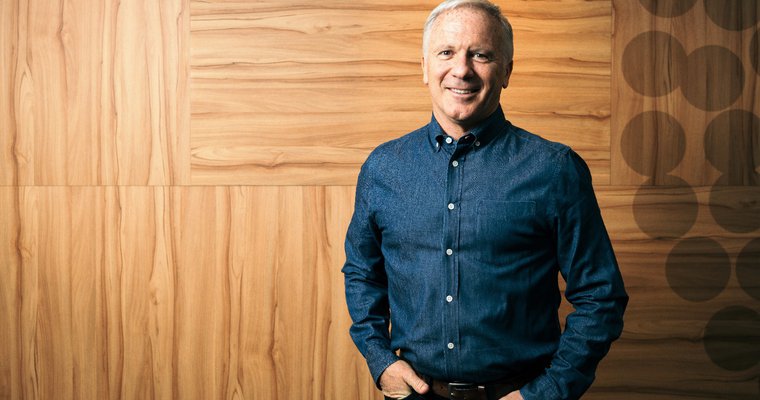 The state of Ohio is not particularly known for a whole lot of distinctions in the culinary world, despite the fact that nearly a dozen major restaurant brands are based in the Buckeye State and cities, like Cincinnati, have staked out a claim for a certain style of chili with chocolate in it.

But then there’s pizza. And when it comes to the almighty pie, Ohio’s status may be improving. Take, for instance, that esteemed culinary publication, Food & Wine, which just named little ol’ Ohio as one of its top 10 states for pizza, no less.

That’s right — right up there with the better-known pizza states of New Jersey (No. 1), New York (No. 3) and even Mystic Pizza-glorified Connecticut (No. 2), Ohio ranked No. 9.

Pizza CEOs of brands based in the the Midwestern mecca, like Columbus-based Donatos, and its CEO Tom Krouse, wonder what took so darn long.

“Maybe it’s the fact that the country intersects in Ohio with national highways that run both east and west and north and south. Like our old state slogan use to say … Ohio really is the ‘heart of it all,'” Krouse told Pizza Marketplace in an interview. “Being located near the crossroads of America, it’s no wonder there are so many different styles found throughout the state. With so many colleges and universities in the state including one of the largest in the world — The Ohio State University — it’s also no wonder so much pizza is consumed in Ohio. Pizza has long been the centerpiece for gatherings and it goes perfectly with the friendliness of Midwesterners, especially residents of the Buckeye State.”

And Krouse is likely among the first to tell you that as part of that amicable Midwestern approach to things, Ohio’s pizzas — particularly those created and sold by Donatos — should be shared with the rest of the pie-loving nation. After all, that concept of sharing and putting yourself in the other guy’s or gal’s shoes is precisely what Donato’s founder Jim Grote (Krouse’s father-in-law) sought to mirror in his business and its practices through a constant adherence to the directions of the “Golden Rule” to treat others the way you want to be treated.

“It may sound corny, but that’s what that Midwestern philosophy creates,” Krouse said. “We’ve been doing that since our humble beginnings with the first store on the south side of Columbus in 1963, to now having our pizza served in 262 locations in 14 states, including 168 traditional restaurants.”

Lately, what Donatos has concentrated on “doing unto others” is giving them lots more opportunities to enjoy the brand’s pies and other offerings through the brand’s first franchising efforts and a fast-track plan for growth through a partnership with the burger chain, Red Robin.

As those initiatives develop, Pizza Marketplace wanted a closer view of the man leading this Buckeye-based brand that truly appears to live and breath the pizzeria. In fact, if you weren’t aware, Krouse is the son-in-law of Donato’s founder, Jim Grote, as he is married to Grote’s daughter, Jane Grote Abell, a founding family member, current Donatos board chair and chief people officer.

In other words, he lives Donatos and spreads around his enthusiasm for the business through what a brand spokesperson defined as a style of “management by walking around,” learned at his former roles at another Ohio-based chain, Wendy’s. He even seems to embody that free-wheeling pizza operator mentality in his spare time when he plays in a cover band that uses traditional Bluegrass musical instruments to deliver songs from rockers like AC/DC and Prince.

In short, we at Pizza Marketplace are intrigued by this pizza leader, so we spoke with him and sharing the conversation.

Q: Well, let’s just start with a bang and see if you’ll tell us if Donatos has any big surprises coming in the near future?
A: Our biggest news this year is that for the first time in our 58-year history we are opening franchise opportunities up to the entire country. In the past, due to the amount of proprietary menu ingredients, it was difficult for us to expand beyond our current footprint. Now, through our partnership with Red Robin (late last year, the two chains announced they had been testing a partnership at stores Red Robins in three states, as Pizza Marketplace reported) our distribution lines are open and we are able to franchise across the entire country. That is the biggest news we’ve ever had.

Q: Aside from a stint with McDonald’s ownership a while back (Donatos repurchased the brand in 2003 from the QSR), Donatos has basically been a family-owned brand, so I’m wondering what difference you think that makes in the overall product?
A:Donatos has always been run by our family for 54 of our 58-year history. As a privately held company guided by such principles as the Golden Rule, we make decisions that are best for our people and our customers, not Wall Street. That’s why our pizzas are loaded with toppings. That’s why our franchise partners have consistently rated us with one of the highest satisfaction ratings in the industry.

We use the word “partner” to describe our franchisees and our vendors. That’s because we really do strive to ensure that doing business with us is a win for all. Just because it is business doesn’t mean you can’t do it with a true sense of care. My father-in-law calls it agape (a Greco-Christian word for unconditional love) capitalism — meaning doing business with love. That’s what a family-owned business can bring to the market.

Q: Can you relay how the stresses of the pandemic altered both the way the brand operates and the way you lead it?
A: The past year has really given us the opportunity to take a look at all of our processes and procedures to find ways to enhance our customers’ experience. Whether that is through curbside pickup, no-contact delivery or enhancing the bandwidth of our mobile ordering, we’ve worked to find ways to constantly do better.

We are also extremely proud of the dedication of all our associates as they have worked hard to stay safe and to fulfill record sales. Along those lines, I am most proud of the way we’ve increased and improved the way we communicate with each other, even though we have been primarily remote, and at the same time have strengthened our culture as well.

Q: Your background is in marketing, including a stint at Wendy’s, so how has that experience guided your work as the leader of a pizza brand, and this pizza brand specifically?
A:Guiding Donatos as the CEO with a background in marketing has helped give me insights into what builds brands. We know that the customer expects the highest quality food served promptly at a great price. The challenge is how to best position that value proposition and build awareness in a very crowded marketplace.

With sales averaging over $1.3 million per restaurant annually, I think our team has unlocked how we take all of our equities (edge-to-edge toppings, crispy thin crust, fresh-sliced veggies and 100 pieces of pepperoni on every large thin-crust pepperoni pizza) and packag(e) them in eye-catching, thumb-stopping media.

We have the best marketing department in the business in my opinion. My background in marketing helps the collaboration between Carol Pasquariello, our marketing SVP, and myself, as we cut through the noise to drive our positioning.

Q: Where is this brand headed within the pizza realm over the next two years?
A: We are really excited about the growth opportunities in front of us. Even during the pandemic, we opened 10 traditional locations over the past year. We will continue to open stores, expand existing markets, and grow to new places.

We are also excited about our partnership with Red Robin where our pizza is being served in 79 of their locations. They will add another 120 locations in 2021 and the remainder of their restaurants in 2022. There is also another ghost kitchen partnership in the works that we can’t wait to talk about in more detail very soon.

In addition, our menu innovation team continues to work daily on building a pipeline of new products as they carefully watch flavor trends and consumer demands. The past year was big as we introduced cauliflower crust pizzas, plant-based sausage and cauliflower wings. Look for exciting new menu additions in the next year.